June 16, 2020
swineham 20-06.5.jpg Sunny afternoon with occasional cloud and really quite warm: * Cetti's warbler, reed warbler and sedge warbler all in good voice * Path lined with flowers but dominated by hemlock water-dropwort * But again, very few insects, especially butterflies Diary Photos The river Frome as it nears the entrance to Poole Harbour The view across Bestwall marsh Some of the area is farmed It is where people mess about on the river A small part of the extensive reed beds at Swineham Point http://dlvr.it/RYmKRT
Post a comment
Read more 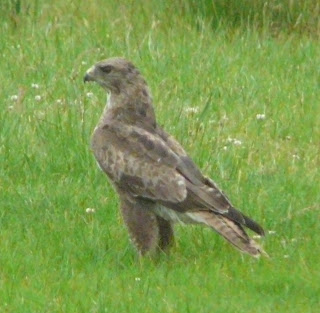 The buzzard stands accused ...! [Photo: Peter Orchard] This letter appeared in the Bournemouth Echo on the 27th May 2020 and I have to say it really saddened me that views such as this still persist. I have encountered the argument many times over the years, usually the poor magpie is the victim of the attack but sparrowhawks get a lot of flack too. This time it is the buzzard: “I MUST agree with Douglas Mills when he writes about the lack of reptiles on many of the heaths in Dorset. As a boy growing up in Wareham, we roamed many of the heaths and woodlands surrounding the town, in those days all species of snakes and lizards were in abundance much to the delight of us kids. Whilst I agree with Douglas that mankind’s presence has played a part in the demise of the reptile population, I do however believe that the increase in the birds of prey population has also played a major part. Years ago, one had to travel to the remote parts of Purbeck to spot a buzzard, now they are everywhere,
1 comment
Read more 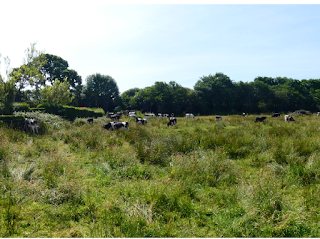 Holstein dairy cattle on Wareham Common [Photo: Peter Orchard] I have lived close to Wareham Common for fourteen years and so visit quite regularly and I have become increasingly concerned at the dearth of invertebrate species in recent years. There has, as is well known, been a general decline in insect populations linked primarily to neonicotinoid pesticides but on the common, and also at Stonehill Down recently where there are a significant number of cattle grazed, I have noticed a change in cattle excrement. I am venturing into the realms of veterinary science here which I am reluctant to do with no background in this particular field but it seems that cattle are now fed a routine medication called ivermectin to combat certain gut infections. I found a little bit about Ivermectin on the 'net': "Studies indicate that when ivermectin comes into contract with the soil it readily and tightly binds to the soil and becomes inactive over time. Free ivermectin may adversely a
1 comment
Read more

May 22, 2020
Controlled burning of heathland in the New Forest (Photo: forestandwaterside.info) The images of the horrendous wildfire just up the road in Wareham Forest this week got me thinking! Fire is something of a paradox on heathlands. Before I go on let me emphasise that I know that the fire was a natural ‘disaster’ in many ways so hear me out … The heaths as we know them today and the unique array of animals and flora that thrive in this particular habitat came about through our ancient ancestors clearing the natural vegetation, especially birch trees, to try and make it suitable for their agricultural requirements. These early farmers did not have heavy plant and machinery to do this, they cleared by burning. They used fire effectively and created what we see today. Natural habitat succession means that left to nature heathland would quickly revert back to birch woodland, you can see this happening in places in Wareham Forest and on other local heaths.  As a child living on the edge of the
1 comment
Read more 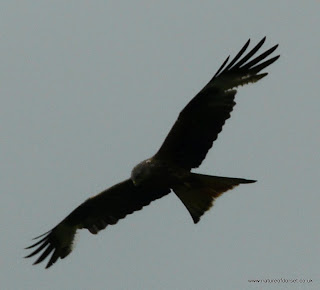 Red kite over Wareham Common  Now that I do not get out as much as I used to I have taken to closely following the tweeted sightings of other nature enthusiasts in Dorset; indeed I am now in my fourth year of analysing what others see. Since I started the process in January 2017 I have never seen anything quite like yesterday's sightings! There were staggering 32 tweets reporting red kites over Dorset, almost all from coastal locations but, more significantly, these reports included 63 over Westbourne, Bournemouth, 79 over Bridport and an amazing 112 over West Bexington near Abbotsbury.  Some of the 32 reports will obviously be of the same birds seen by different observers but the three locations I have mentioned I chose not only because of the number of birds seen but because they are spaced out and not likely to be duplicated sightings. These will not be actual totals for the whole day from each of these three locations but totals for the period of time someone was watching so th
1 comment
Read more 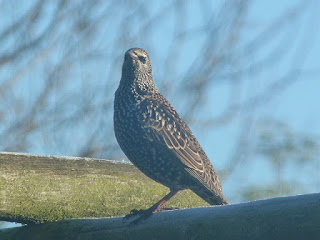 Photo: Adult starling leading a family feeding outing What with the 'lockdown' in force coupled with a slight downturn in the weather we were confined to the house for much of the day and spent the time watching the birds in the garden. We do not have a special garden that normally attracts lots of birds, even in the depth of winter, as we are not near woodland or a particular habitat that would influence what we see here. This afternoon, though, we witnessed something we have never seen before. Over the last few days we had already seen a fledgling robin in the garden, we think a pair nested in some shrubs at the bottom of the garden which they have never done before. Two pairs of our resident house sparrow colony have been out feeding young and we have had three fledgling blackbirds looking a bit bewildered as they find their way in the world.  Add in a young dunnock and the numbers are almost complete. This afternoon, however, a flock of around thirty starlings desc
1 comment
Read more 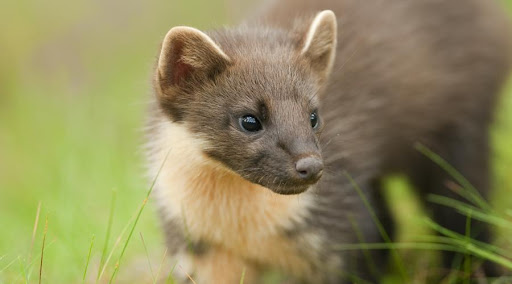 A video appeared recently (30th April 2020) of a pine marten in Sandbanks, between Poole and Bournemouth in Dorset. You can see the video here:  https://www.bbc.co.uk/news/av/uk-england-dorset-52472172/pine-marten-footage-is-thought-to-be-first-dorset-sighting There were a number of strange things about this which make the sighting a real mystery. Why is this a mystery? Well, for a start, it is probably the first sighting of a pine marten in Dorset in living memory, they have long since disappeared from this part of the world. It is also a woodland species and whilst there are conifers around Sandbanks it could hardly be considered to be a woodland area! The pine marten is also primarily nocturnal and this one was seen in broad daylight and, add to that, they are very nervous creatures and this one was amongst houses. It is also strange that there was just this one sighting by one person who happened to have a video camera at the ready just at the right time. There could be a number of
1 comment
Read more
More posts